Limb and Musculo-Skeletal Focus (shoulders, elbows, wrists, hips, knees, ankles)
Learn how to use your limbs to regulate:

Trunk and Physiology Focus: Spinal health and the body systems (respiratory, circulatory,
nervous, immune, endocrine and reproductive)
Learn how to use your posture, movement and breathing to develop energy, strength and stability;
and increase mobility of your spine while and remaining calm, focused and healthy. 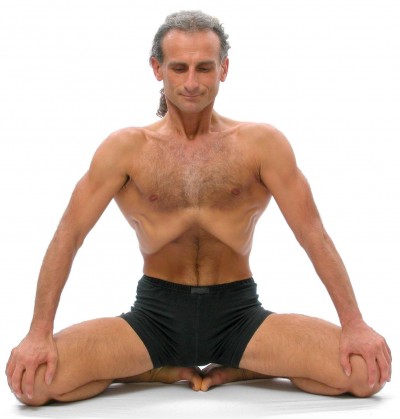 Simon Borg-Olivier MSc BAppSc (Physiotherapy) is a director of YogaSynergy, one of Australia’s oldest and most respected yoga schools with a style based on a deep understanding of yoga anatomy, yoga physiology and traditional Hatha Yoga. Simon has been teaching since 1982. He is a registered physiotherapist, a research scientist and a University lecturer. Simon was introduced to yoga at age six, learning breath retentions from his father and the main bandhas (internal locks) by Basil Brown, (an Olympic athletic). At age 17, Simon studied for one year with a Tibetan Lama who introduced Simon to the philosophy and practice of tantric yoga. In 1980, Simon started the postures and movements of Hatha Yoga, eventually learning with BKS Iyengar, K. Pattabhi Jois and TKV Desikachar.

Simon met his main teacher Natanaga Zhander (Shandor Remete) in 1985 and had the privilege of studying intensively with him for almost two decades. Simon credits Zhander as being the most important person in his pursuit, passion and understanding of hatha yoga. To this day, Zhander remains as Simon’s foremost yoga inspiration and mentor. Simon studied and taught at Sydney University over a period of 20 years. In that time he completed a Bachelor of Science in Human Biology, a research based Master of Science in Molecular Biology and a Bachelor of Applied Science in Physiotherapy. In 1988, Simon met physiotherapist and yoga teacher Bianca Machliss. Together, over the last 20 years, Simon and Bianca have developed the unique YogaSynergy system.

Simon is regularly invited to speak on radio and has had numerous television appearances. He is featured in the recently released film ‘Yoga and Me’ (2009) produced by Robbie Baldwin. He has also been invited to be a guest lecturer/presenter at many conventions and annual conferences. Since 1995 Simon has been teaching courses in the Applied Anatomy and Physiology of Yoga internationally. Apart from training many teachers in YogaSynergy System with Bianca Machliss, Simon has also been an invited guest lecturer at many major yoga teacher training courses throughout the world.

In the last few years Simon has continued to develop his understanding of yoga by studying intensely with the Taoist Master Zhen Hua Yang.