Many golfers have credited the techniques learnt in yoga with better performance on the golf course. By Justine Moss

WHEN Mardan Mamat became the first Singaporean golfer to win a European Tour event at the OSIM Singapore Masters in 2006, he credited his study of yoga as a key factor in his victory, saying that his yoga breathing kept him calm. Others, such as Indian golfer Jyoti Randhawa have also credited the techniques learnt in this physical and mental discipline with better performance on the golf course. There are many benefits for golfers who practise yoga, according to Sukhdev Singh (otherwise known as Yogi), a yoga master at True Yoga in Singapore, who says it helps to focus the mind by giving better mental concentration. Yogi has worked with Mardan (2004 to 2009) as well as Asian and European Tour regular Randhawa, and from 2002 to 2005, he worked with more than 50 golfers on the Asian Tour.

In 2002, Yogi worked with Randhawa after the golfer broke his collarbone in a motorcycle accident. Three months later he carried Randhawa's bag in the BMW Asian Open. Although Yogi didn't know much about caddying, he was there more in his capacity of yoga guru rather than to read yardages or help with club selection. Randhawa finished runner-up and went on to become the first Indian to win the Order of Merit, that year.

He adds that even though a golfer will know exactly what distance he can hit with a particular club, other details can start to sneak into the conscious mind, such as where the bunkers and water hazards are placed between the ball and the green. "What happens then is your muscles become tight," says Yogi.

"When you go to swing and your centre line (spine) is stable then you have less chance of making a mistake. When you hunch your shoulders immediately your centre line has changed. You need to train and educate your conscious mind how to be thoughtless. When Nlardan won the 2006 Sin-gapore Masters he had no thoughts in his mind."

Yogi, a former athlete, teaches a number of different types of yoga including Hot Yoga (which he recommends for golfers), Hatha Yo-ga, Gentle Yoga, Yogalates, Power Yoga and Pranayama Meditation. He has a postgraduate degree in Yoga and Prelcsha Meditation and has won a number of awards in various yoga championships. According to him, yoga will work for any human being and while it doesn't matter how often one should practise yoga every day, it depends ultimately on how much a golfer wants to improve his performance. "It depends on your desire — the first step in the whole package of physical fitness is flexibility and when you stretch your muscles it's going to strengthen up your muscle fibre, which increases your flexibility of your muscles," he says.

"When you're more flexible, your joints are more supple, your range of motion is much better and you can hold more energy. The second step is cardio, the relationship between your lungs, heart and your muscles, and the third is strength."

Asian Tour executive chairman Kyi Ella Han has been practising yoga for the past 10 years, and tries to spend 20 minutes doing his breathing exercises every morning. "Yogi taught me breathing techniques and in my last three years playing on tour I used them a lot. 31P These days, the exercises help as a stress reliever in my job."

Mr Han adds that yoga helped him be alot calmer on the golf course when he was a tour professional. "My emotions were pretty even and I practised the breathing routine a lot," he says. "I also found that my muscles which were pretty tight and stiff became more relaxed, my flexibility improved and I became men-tally calmer."

The yoga techniques that Yogi teaches are a combination of both mental and physical and both are important. "They affect each other but the mental aspect is more important," says Yogi, who has also designed his own exercises. "I haven't invented new things, but I just combine various exercises. I have some amazing stuff and it works like magic." One of them is called Jedi Yoga which is a combination of breathing, meditation and exercises which work on both the physical and mental aspects of a golfer's game, like flexibility and mental calmness.

He adds, "90 per cent of the game is mental, 5 per cent is physical fitness and 5 per cent technique. With technique you already know within two or three years how to swing a club. Golf is a game of awareness and after calculating distance and measuring where you need to land the ball, you take a stance and just swing the club. But most people just try to hit the ball and when you do that you jerk your body and the flow is gone - you need a smoother flow."

Proper breathing exercises can help achieve this, according to Yogi, who says that the quality of our breathing technique has a direct association with our pose or stance and peace of mind. He adds that correct breathing increases blood flow to the muscles and subsequently increases the body temperature. "Once your body is relaxed, your mind is relaxed — then your tempo and swing will be in sync." btnews@sph.com.sg 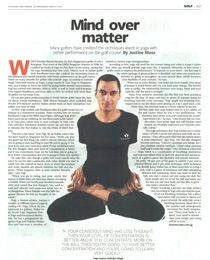