Yoga Beyond The Physical

WHILE a satsang might sound new-fangled, it is just a typical yoga session - almost.

The room is darkened, music might be playing softly and students are gathered round an instructor, but here is the difference: They are talking and in deep discussion, not quietly focused on their postures.

With encouraging attendance at sessions like the satsang, a discussion on all things yoga, and the kirtan, a musical meditation session, yoga practitioners here are moving beyond physical yoga practice.

At least one big player, Pure Yoga, and a few boutique studios here are offering such sessions.

Said Mr Copper Crow, Pure Yoga's managing teacher: "Yoga is a whole lot more than just asana (physical yoga postures). We are offering these sessions for students who want to expand and deepen their yoga practice.

"Satsang means 'the gathering of like minds' (in Sanskrit). This is an opportunity for students to talk with teachers, and to explore how they can take their yoga to the next level."

Satsang sessions are held weekly at Pure and about 10 students attend each time.

Meanwhile, kirtan, which, according to Mr Crow, is "the yoga of chanting, a kind of active meditation", takes place monthly.

Yoga as a philosophy is widely accepted to include many components, such as meditation, cleansing of the body and so on, but it is the physical postures that are popular among modern day practitioners.

Mr Don Peers, managing teacher at Yoga Space in Liang Seah Street, feels that the increasing focus on the spiritual aspects of yoga is a natural evolution of the scene in Singapore.

He said: "As the students become more aware of yoga, they naturally seek a wider understanding of the practice."

Usually, students first seek "mastery of the body, then the breath, then the mind", Mr Peers added.

While the other big player in the local yoga industry, True Yoga, does not offer satsang or kirtan sessions, it has a regular pranayama and meditation class.

"The focus on deep breathing helps to increase oxygen saturation in the blood. This enables the respiratory system to function at its best. It also helps to reduce stress hormones."

She added: "The meditation part of the class includes mental focusing techniques. Where participants are encouraged to visualise images in their mind, such as a sea or a mountain. This is done to further calm the mind."

The concept of such community-based events "benefits not only the practitioner, but is also a great opportunity to build the yoga community", said Pure's Mr Crow.

Ms Stephanie Tan, 25, a public relations consultant who attends Pure's Satsang sessions, agreed, saying: "By studying the spiritual and theoretical aspects of yoga, I gain a more holistic practice. It's about bringing yoga off the mat and into my daily 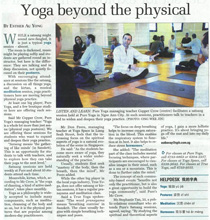